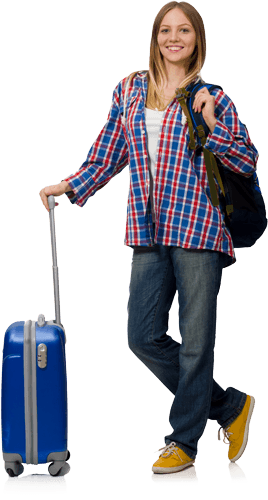 9158 customers reviewed Gogido with an average score of 8.5

Staxi, the fixed price taxi from Amsterdam to

In the energetic capital of the Netherlands is always something going on. Less than eighteen kilometers from Schiphol Airport Amsterdam is the metropolis. Once in town there is a huge range of attractions and activities. The Anne Frankhuis, the Van Gogh museum and Rijksmuseum are the most important museums in the city. Also make sure you take a walk through the Vondelpark to taste the atmosphere of Amsterdam. Every week there are nice markets to visit such as the Noordermarkt, the Waterloopleinmarkt and of course the Albert Cuyp markt. Famous squares in Amsterdam are, Leidseplein, Rembrandt Square, Museum Square and Dam. If you like football, visit a match of Ajax in the Amsterdam ArenA.

As the "must do's" in Amsterdam are widespread, we recommend to use taxis. There are plenty of taxi's in Amsterdam. Among others on the Wibautstraat, at the Olympic Stadium on the Stadhouderskade and of course at all stations. Of course you can book a taxi at Gogido. All taxis at Gogido have access to the tram tracks, so you they bring you from A to B as quickly as possible.

As in all major cities, pickpockets are typically active in crowded places and cafés, bars and restaurants. Pickpockets are known to target major events (especially during the summer season) and the Museum District, as well as public transport (especially trams and train services between Amsterdam Airport Schiphol and Amsterdam Central Station). Mind your belongings carefully – take extra care of valuable items such as smartphones – and if possible, leave your valuables in a safety deposit box or safe at your hotel, or a locker at the station. It’s advisable to keep the amount of cash you carry with you to a minimum. If you are the victim of pickpocketing, report it to the police (see below). Read our tips for avoiding pickpockets in Amsterdam.

If you are a victim of crime, report it to the police. Either report the crime online via the (website in Dutch) or in person at a police station in the city (by appointment). The Dutch police website offers a map of police station locations. In emergency situations or to report a crime in progress, call 112. For non-emergency situations requiring police assistance or to make an appointment to report a crime in person, call 0900-8844 (if using a mobile phone with an international SIM card please dial +31 343 578 844 ).

For emergency visits to your hotel room, telephone consultation and consultations on location, contact the hotel reception or call the tourist doctor on +31 (0)20 427 5011 . Fees are determined by the national GP association and are covered by most travel and medical insurances.

For less serious issues – such as minor falls, forgotten medication or unexpected/recurring minor conditions – you can contact HotelDoc on +31 (0)63 090 0346 . HotelDoc's medical professionals provide comprehensive in-room medical care for Amsterdam's visitors who want to bypass the inconvenience of hospital visits. For information on fees, visit the HotelDoc website.

Amsterdam's 24-hour dental clinic, Dental 365, treats patients experiencing chronic pain and other dental emergencies on a walk-in basis. The practice is open from 8:00 until 23:00, and a dentist is on call 24/7 for emergencies after these hours.

The consumption of alcohol is prohibited in the majority of public places in the city centre, but you are naturally welcome to visit one Amsterdam’s many bars. Never combine drugs with alcohol. For more information about health matters in the city, contact the Public Health Service of Amsterdam.

For serious drug and alcohol-related emergencies, seek immediate medical assistance. In the Netherlands, you cannot be prosecuted for offences related to taking drugs subsequent to visiting the emergency department.

Purchasing and smoking soft drugs such as cannabis is only permitted in coffeeshops; individuals (aged 18 and above) are permitted to purchase a maximum of five grams a day. Purchasing or selling hard drugs such as ecstasy (MDMA), heroin and cocaine is illegal. Visitors are advised to ignore street dealers, as they can become aggressive and often sell fake or unsafe drugs.

If you are planning on trying soft drugs, research the subject in advance. Exercise caution and never combine drugs with alcohol.

Window brothels, sex clubs and escort agencies can operate legally if they have been granted the relevant permits by the City of Amsterdam. Everyone is welcome to visit the Red Light District, although if touring the area, be respectful and don’t take photographs or record videos. If you decide to visit a prostitute, practise safe sex and never deal with prostitutes under 21 years of age. Forced prostitution is an extremely serious crime. Remain vigilant to indications of forced prostitution (such as anxiety, bruises or willingness to have intercourse without a condom) and report any suspicions to the police by calling 0900-8844 /+31 343 578 844 or anonymously on 0800-7000 (from a Dutch phone).

Be careful near the canals

The canals in Amsterdam are beautiful, but they can also be dangerous – and sometimes deadly. Accidents occur when people stumble too close to the water’s edge, and if you happen to fall in it’s not easy to climb back out due to the high walls and cold temperatures. Always mind your step when standing or walking near a canal or waterway, and pay close attention to your surroundings. Please note that it is illegal to urinate in the canals. Public urinals are widely available in Amsterdam, so always find a nearby toilet and stay safe.

Accidents can happen. If things do go wrong, take the following action:

If you fall in the water

If you see someone fall in the water

Taxis in Utrecht, The Hague, Rotterdam and the rest of the Netherlands